Marysela Zamora is a film and performing arts producer based in Costa Rica. Marysela is an award winning leader from Latinoamerica by the Global School of Social Leaders (Vienna). She is the founder of Fabrica de Historias (artistic and creative production company) and Nosotras Women Connecting (gender equality initiative). She has been in charge of projects like The Odd Couple (2019), Broadway Cabaret Night (2017, 2018 & 2019), Chicago, the musical (2017 & 2018), West Side Story (2015), Films for Transparency Film Festival (2018). Marysela is a social activist and has worked in Presidential House as a consultant for the Solis Rivera administration (2014-2018).

She wrote and directed the short film “Any Other Day”, screened in diverse film festivals including Guanajuato Film Festival, it was awarded in Short Film in Lúdico Film Festival (CR) and Cine Frame Film Festival, Calcuta (INDIA). Marysela was the producer of marketing and public relations of feature film Red Princesses (2015), working next to Hollywood film publicist Joshua Jason. Zamora is a creative social innovator working on creating artistic and film projects aiming culture change, such us short documentary film “Tarcoles” directed by  Sami Sneider, premiered in the Awareness Film Festival, Los Angeles. 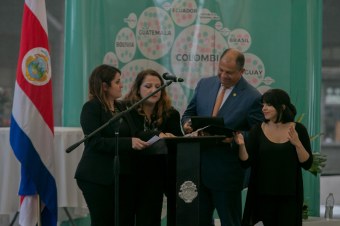 Zamora holds a degree in Communication Science from the University of Costa Rica. In 2014, she completed the Community Solutions Program along with George Mason University, this program chooses leaders from around the world for a intensive professional program from the State Department. In 2017, Marysela was part of the prestigious  Young Leaders of the Americas Initiative y recently she got into the accelerator program for business women of Central America, WE Americas.